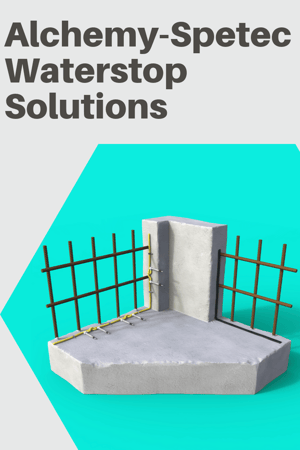 Spetec WT400 is a caulk designed to swell and/or expand in the presence of water creating a water tight seal around pipe penetrations, cold joints and other water-stop locations. Read more about Spetec WT400 here.

The Spetec Injection Tube System Kit is used in conjunction with the Spetec PUR F400 or Spetec PUR H100 as a primary waterstop in cold joints and pipe joints. This system can also be used in retrofit applications for expansion joints and other wide cracks or joints measuring over 3/8 of an inch. It includes four parts:

Read more about the Spetec ITS Kit here.

The Spetec Re-Injectable Tube System is a primary waterstop in cold joints and pipe joints. When used with acrylates like Spetec AG200, it can be flushed with water at a pre-determined set time, creating a clean tube ready for subsequent use. It can also function as a standard single-use injection tube system with polyurethane injection resins like Spetec PUR H100 and Spetec PUR F400. The Spetec R-ITS is compatible with combination grouting techniques involving microfine cement. Read more about the Spetec R-ITS here.

Spetec SST500 is a black hydrophilic synthetic waterproofing strip. It is simply fastened onto an existing joint. When in contact with water in a confined space, SST500 will swell and stop the infiltration. SST500 remains consistent in its performance throughout its life cycle and the flexibility allows it to fill voids and cracks in the immediate surrounding area. Read more about Spetec SST500 here.

For ultimate waterstop protection, call Alchemy-Spetec at 404-618-0438 for instructions on how to use all three of these products together.