The Best Pump for Joint Filling 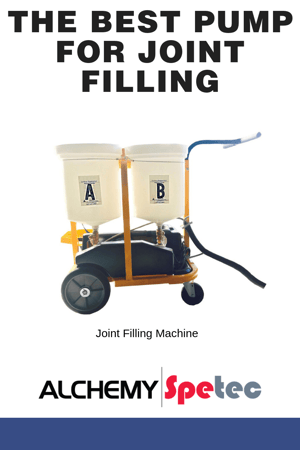 In this post, we'll profile the Alchemy-Spetec Joint Filling Machine, which is used with AP Joint Fill 800 and AP Fast Repair 850 for structural repair jobs.  This article covers a lot of technical territory in a few short paragraphs.  So, if it raises any questions for you, please call us at 404-618-0438.
Off-ratio product is probably the most prevalent issue with polyurea joint pumps.  This typically comes down to just a few possible scenarios.  Most commonly the material may be a bit too thick for the machine.  For instance, many suppliers market their pumps as "joint filling", but fail to specify product choices for the pump.  A small difference with the Alchemy-Spetec Joint Filling Machine (manufactured by US Saws) is the 1" throat from the bottom of the hopper leading to the rotary gear pumps.  Most suppliers are using 5/8" or 3/4" throat.
Another common symptom you may run across with some pumps: Any time there is any build-up in the static mixer (which is common with material that sets in 30 seconds or less), there may also be back pressure put on the system, and the seals around the shaft for the sprocket/chain assembly may blow, and then you'll see material dripping from the shafts by the chain.  This is another tell-tale sign that the pump you are using is not pressure rated high enough.  And once a seal is compromised at all, the ratios go all over the place.  Concentric seals do much better with this. Also be careful with your flushing agent here.  If you're not using the Alchemy-Spetec Joint Filling Machine, ask your pump manufacturer what the seals are made of.  PTFE seals typically hold up to solvents better than Viton, for example.  A chewed up Viton seal caused by acetone flush can be a common cause of off-ratio product.
The reason we chose the pump we have for our line is because US Saws has it best figured out.  Feel free to browse the US Saws link below for specifics on the machine...
https://www.ussaws.com/polymer-system-us-saw-joint-fill-polymer-pump
One of the things we really like with this pump is that they have a unique configuration of the chain/sprockets which keeps more teeth of the sprocket engaged, and that prevents any skipping of the chain when back-pressure is encountered.  Also, the HDPE tanks are nice because you can see the levels of the material.  With the steel tanks of other pumps, often times the applicator will happen to look into the tanks only to realize that the last 100' of joint fill he put down is off-ratio.  It's much better to see this in real-time, all the time.  This pump also has the wide throat and PTFE seals. 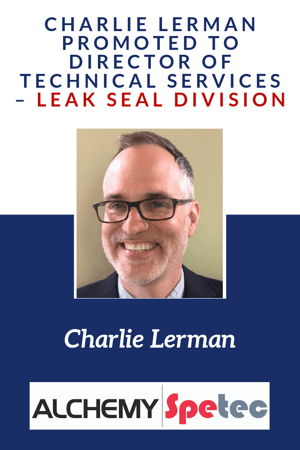 Alchemy-Spetec is proud to announce that Charlie Lerman "The Grout Geek" will be shifting roles to start up our North American Leak Seal Technical Services Department. Charlie not only brings two decades of specialty waterproofing and construction experience to his new role as Director of Technical Services - Leak Seal Division, but he also brings nine years of service in the US Navy. He understands the value of teamwork and is dedicated to the mission.

While the trend in the last few years for chemical grout manufacturers has been to reduce or eliminate their technical service roles, Alchemy-Spetec understands the needs of the specialty waterproofing contractor and is committed to customer success. Leveraging Alchemy-Spetec’s quality products, strong distribution, and our rapid response technical service is what gives our contractors the edge they need in today's fast-paced market.

Please let us know how we can assist you with your next waterproofing challenge. Whether you need help with product selection, hands-on field training, or creative grouting solutions, Alchemy-Spetec is here for you. 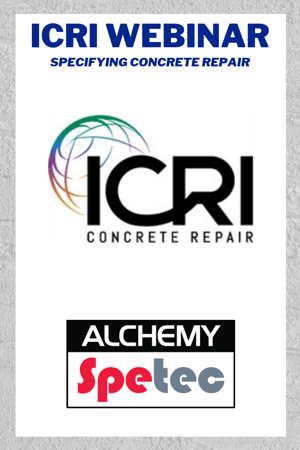 As a member of the ICRI Board of Directors, I'm happy to share the following information about the upcoming ICRI Webinar: Specifying Concrete Repair.

Between 1971 and 1975, Karl attended Drexel University, participated in their cooperative education program and became a student member of the American Society of Civil Engineers.  Following graduation with a BS in Civil Engineering, Karl spent the next 11 years gaining experience as a structural engineer through work at Lamprecht Consultants, Skarda & Rickert Structural Consultants, and Whitney, Bailey, Cox & Magnani.  In 1979, Karl became a registered professional engineer in the State of Maryland and is currently registered in eight states and the District of Columbia.  Karl completed an MS in structural engineering at George Washington University in 1984.

In 1986, Karl founded Rickert Engineering, Inc. and continues to serve as President of the firm.  Karl completed an MBA at Loyola College in Baltimore in 1994 and has maintained memberships in professional organizations including ACI, ACEC, AISC, ASCE, CSI, ICRI, and NSPE.  He has been an officer at the local level of several of these organizations and is currently active on committees (past-chair of Committee 110) at the national level of the International Concrete Repair Institute.  He is also currently serving on the Maryland Board of Professional Engineers. 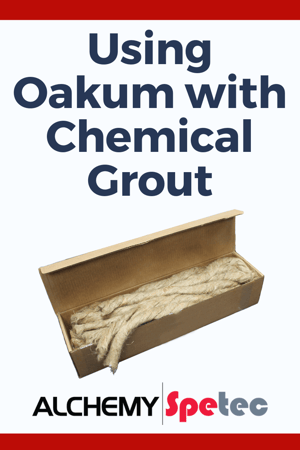 Using oakum with chemical grout is a way of sealing gushing leaks, as well as sealing the area (annular space) around pipes passing through concrete structures. When a pipe passes through a concrete structure and the annular space around the pipe is large, the saturated oakum technique can be used to seal off the water infiltration. Oakum saturated with grout can be used alone to seal off water flow. It can also be utilized to build a surface seal or “dam” behind which grout can be pumped.

This is a two-person process.

After the space has been packed with saturated oakum, you can inject grout behind the seal with an injection needle. 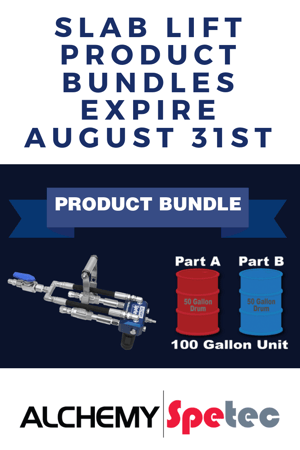 The new stainless-steel block for the MixMaster Pro concrete leveling gun is an option you may want to consider. This stronger, more durable gun block was developed to prevent stripping of injector ports (which can sometimes happen with the aluminum block if the ports are over-tightened).

There are no problems with the aluminum block as long as all your crew members are trained not to over-tighten the ports.  But if you would like that extra level of projection and durability, consider spending a little more for the stainless-steel option. 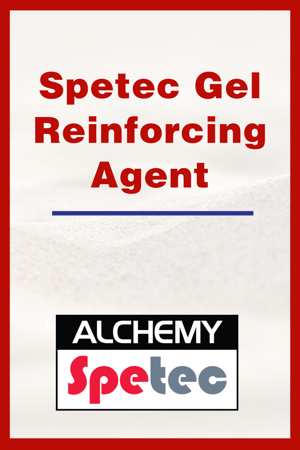 Spetec Gel Reinforcing Agent is an acrylic latex additive used to increase the strength and flexibility of our AG series of acrylic gels: Spetec AG100, Spetec AG200 and AP SoilGel 200. 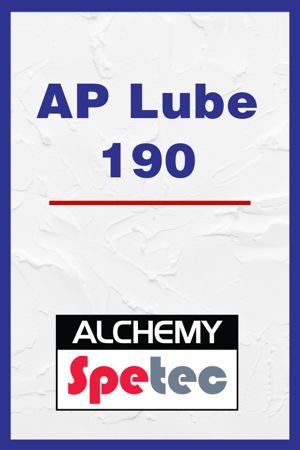 AP Lube 190 is a multi-purpose lubricant for use with both electric injection pumps and proportioner/reactor pumps. 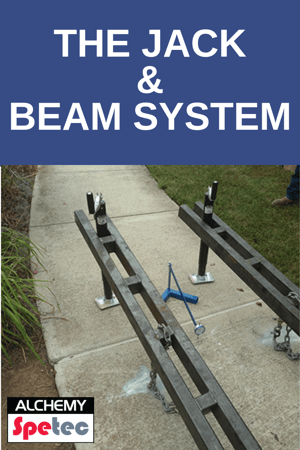 The Jack & Beam System provides mechanical leverage for guiding the lift direction of slabs or holding them in place while filling voids beneath. 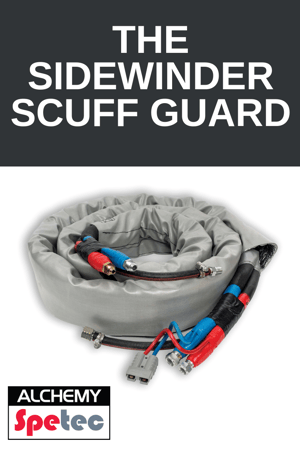 When your reputation is on the line, we’ve got you covered.
Sidewinder Scuff Guard incorporates the most advanced
insulation and abrasion-resistant materials to enhance application
and provide higher yields when pushing foam.

Forget the duct tape and nylon sock! Bundle up with Sidewinder’s “all-season” Scuff Guard from Alchemy-Spetec.

Previous All posts Next