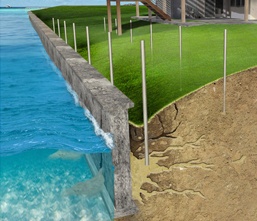 I wrote the first one as an introduction to the causes of seawall erosion, the outward signs that erosion is taking place and the product we recommend for repair.  Read it for background on why damage occurs and how to spot it.

Stephen Barton wrote the next one on the polyurethane seawall repair process. Read it for a good step by step overview.

Stop Erosion Through Your Seawall with Polyurethane

When it comes to seawalls, there is a lot more to learn than meets the eye. A seawall is like a living, breathing thing: especially in the way that they are designed to function. But like all living breathing things, they have a finite lifespan. For many of them, it's a mere 20 – 30 years. Depending on where you live, replacing a seawall can cost anywhere from $150 to $500 per foot. That's enough for some homeowners to choose to move instead of rebuilding their seawalls. Today however, signs of seawall distress can be solved before they get too bad through the application of polyurethane grouts to seal leaks, fill voids, and stabilize the surrounding soils.

Although seawalls are found around lakes and rivers, it is around the ocean that they are put to the most difficult test. Salt corrosion, tidal action, currents, boat wakes, storm surges and sometimes hurricanes all deliver a constant beating on the seawall. But many of the forces are also coming from the landward side of the wall. Every time it rains or the irrigation system runs, and every time the tide goes out; all of the groundwater above the waterline has to vent or equalize. Tremendous pressures can build up if that water is trapped and cannot make its way into the sea or the storm water system.

Read more in the post Stop Erosion Through Your Seawall with Polyurethane.

As tidal flows rise and fall, water pushes its way in through cracks, joints, and defects in seawalls. The water pushes in on incoming tides and flows out on outgoing tides. As the water flows out, it carries sand and soil with it which causes undermining of the structure, voids to form, and deteriorates the structural integrity of the seawall. This cycle is exacerbated during periods of heavy rain which continue the outflow of soil.