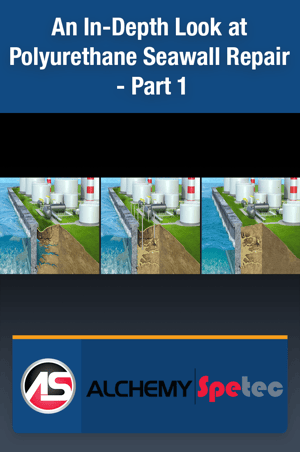 Please note: Since this article was originally published, Alchemy-Spetec has added a new division: Seawall Repair Network, the only national, all-inclusive seawall repair, and preservation network. Preferred marine contractors are carefully selected for their experience, integrity, reputation, and customer service record. Each contractor has been thoroughly trained in Seawall Repair Network product and solution application methods.

In this blog post we’ll look at an innovative way to repair seawalls instead of replacing them by stopping high flow leaks, filling the voids behind concrete structures and binding loose soil with polyurethane foam.

As we noted in an earlier post, Leaking Seawalls: Soil Loss Prevention & Remediation, the underlying cause of seawall deterioration is as follows:

As tidal flows rise and fall, water pushes its way in through cracks, joints, and defects in seawalls. The water pushes in on incoming tides and flows out on outgoing tides. As the water flows out, it carries sand and soil with it which causes undermining of the structure, voids to form, and deteriorates the structural integrity of the seawall. This cycle is exacerbated during periods of heavy rain which continue the outflow of soil.

In landscaped areas, evidence of soil erosion is often quite obvious. You’ll often see small sinkholes developing near the seawall. Some types of grass creep and will actually keep even larger sinkholes from being seen. So it’s important to inspect closely underneath tall grass, shrubbery, etc. Other clues can include cracks in concrete slabs near the seawall and piles of sand building up at the base of the seawall on the water side (if you get a view of that area).

If you’re still not sure, you can use a soil probe to get a feel for the condition of the soil near the seawall.

When it comes to repairing a seawall, you have three main options:

You can tear out the wall (or part of the wall) and replace it. This approach has a few daunting downsides. Namely, it can be…

Paying for a new seawall is no doubt going to cost more than any kind of repair. A complete rebuild will also take some time. Not to mention the inevitable mess, a good portion of which is likely to end up in the water. Excavation also requires getting a permit, which can eat up a LOT of time.

We still see contractors and property owners filling sinkholes and trying to plug seawall leaks concrete. This outdated approach has many disadvantages when compared to polyurethane repair. For example, it’s…

The amount of cement grout, labor and machinery required can be quite disruptive as well.  Compared to the stealth, surgical approach of polyurethane repair, the property owner can end up with quite a mess on their property during a cement grout repair job. Needless to say, with all this extra material, machinery and labor – the whole process takes longer than your typical polyurethane repair. Cement grout is known to shrink and degrade over time as well. Imagine the frustration of paying for an expensive seawall repair, only to see it wash out over the next few weeks. Cement that doesn’t wash out can add weight to the structure and sink over time.

Compared to the typical disruption caused by excavation or cement grout repair, a polyurethane repair team will seem like a stealthy ninja strike force. Polyurethane installation equipment and procedures allow for a non-invasive, clean approach to repair that often allows the property owner to continue use during the process. In all cases, the property owner can resume activity on and around the structure within hours after a repair. As explained in our blog post Alchemy-Spetec's NSF Certification Spells Environmental Protection, most of our products have been rigorously tested not only for contact with typical recreational and commercial bodies of water, but even for contact with drinking water. So there is NO doubt about the environmentally friendly advantages of Alchemy-Spetec seawall repair materials.

In the next installment of this two part blog post series, we’ll take an in-depth look at the most common Alchemy-Spetec product used for seawall repair: AP Fill 700. We’ll also share an impressive case study on a seawall crisis at an upscale marina that was resolved by contractors using AP Fill 700.  Read part two here...