The Trouble with Voids 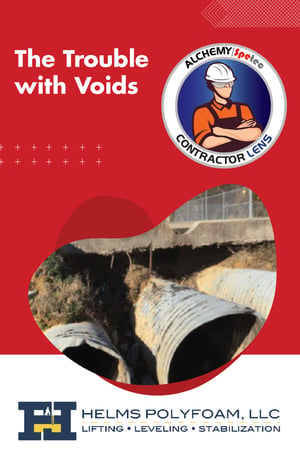 This post is part of the Alchemy-Spetec Contractor Lens series, featuring views, news & case studies written by our customers.  This article, written by J.R. Crowell of Helms Polyfoam, is an overview of void filling with polyurethane foam.  If you're an Alchemy-Spetec customer and you'd like to discuss writing content for our blog, please send an email to marketing@alchemy-spetec.com today!

In the chemical grouting world, a void is defined as an area beneath a house/building, slab, or structure where soil was once present and is now absent. Voids are a sign of soil loss typically brought on by drainage issues and/or poor soil compaction. If voids are not addressed properly, they will continue to get bigger, and the structure’s integrity will be at stake.

Your first thought may be to fill the void with field dirt or topsoil in hopes of fixing the issue. In most cases, this method will only temporarily fix the problem visually, NOT structurally. The soil will not be properly compacted, and the structure will not have the necessary support. Also, the water paths have already been created, and water will continue to drain to this area and pull soil from beneath the structure.

Long-lasting polyurethane repair for this common problem will help you forget the void ever existed. The space will be filled with our expanding polyurethane resins by way of injection. This is a high-density, low-weight structural foam that can support thousands of pounds per square foot. Polyurethane resins enter as a liquid to chase all the water paths and fill the void space that was created. It then expands into a solid to displace all loose, weak soil and gives the structure/slab the support that it needs. This is all done in a day’s work with no headache, no stress, and no more floating slabs that serve as a ticking time bomb.

If you're located in the Mississippi area, give Helms Polyfoam a call today at (601) 966-7821 or fill out their contact form to learn more about fixing your soil stabilization issues. 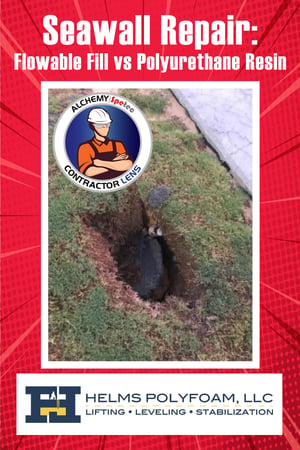 This post is part of the Alchemy-Spetec Contractor Lens series, featuring views, news & case studies written by our customers.  This article, written by J.R. Crowell of Helms Polyfoam, explains the difference between two popular types of seawall repair materials.  If you're an Alchemy-Spetec customer and you'd like to discuss writing content for our blog, please send an email to marketing@alchemy-spetec.com today!.

Seawalls play an important role in shoreline protection and adjacent structure stability.  Over time however, hydrostatic pressure, storm surges, and simple aging will create the need for routine maintenance to be performed on the walls themselves as well as on the soil behind the walls.  When repairs are needed, it's important to use the most effective material available.

Let's take a look at a recent job in which two different materials were used.  We were brought in on a project where a metal coastal seawall was damaged by heavy erosion and washouts.  This particular repair was part of a larger scale revitalization to a public access area, so safety and aesthetics were very important.  Prior to our involvement, the repair plan to fill the voids called for flowable fill, a cementitious mixture, to be pumped into all known voids.  That process was completed on a Friday, and when the site was evaluated the following Monday, over half of the voids were back.  Why did this happen?  Here are a few reasons:

We used a permeating, hydrophobic, polyurethane resin to seal off the problem areas.  This material is a bit of a hybrid chemical, meaning it has both permeating and expansive qualities.  (It should be noted that the expansive qualities are not synonymous with the qualities of the rigid, two part expanding foams used to lift and stabilize structures.)

Two days after the repair was completed, this area was hit with a tropical storm dumping 8” of rain in a matter of days and sending a powerful surge that caused waves to crash over the seawall. A thorough site evaluation the next week revealed that the polyurethane resin repair held.  So, why was this repair successful?

Seawall failures are common and can be expensive and unsafe if done incorrectly.  We want to make sure you have access to all the information necessary to make an informed decision.  The initially failed repair was not at all due to negligence, but simply a lack of information.  The property owners weren’t aware of a better method.  Therein lies our mission, to solve problems permanently and educate while doing so.

This post is part of the Alchemy-Spetec Contractor Lens series, featuring views, news & case studies written by our customers.  This article, written by J.R. Crowell of Helms Polyfoam, explains why polyurethane slab lifting requires less downtime than alternative repair solutions (and why that's an advantage for property owners & managers).  If you're an Alchemy-Spetec customer and you'd like to discuss writing content for our blog, please send an email to marketing@alchemy-spetec today!

When deciding on a repair plan for a commercial facility, no matter the type of repair, one very important factor to consider is downtime. That old expression “time is money” is not a joke, especially when we are talking about downtime for a business.

A large portion of repairs in the commercial market, whether it be concrete lifting, soil stabilization, or void fill, are in areas with high traffic. This traffic usually consists of forklifts, heavy equipment, and semi-truck and trailers, all of which have a dollar amount tied to their load or run time. Every minute they are aren’t running is a minute they 1) are not making money or 2) are losing money on a late delivery or late project completion.

How is Polyurethane Foam Beneficial to Downtime?

Polyurethane repairs generally require only one truck or trailer or even smaller equipment. Crews can work around high traffic areas and times to ensure that daily workflow is minimally impacted.

When it comes to concrete lifting, polyurethane resins begin to set up within 15 seconds after injection and are 90% cured within 30 minutes. This means that by the time the crew leaves the site, the treated areas are ready for “business as usual” and can allow normal traffic. Compare this to demolition and concrete pouring (days of labor and curing), and you see a huge savings on downtime.

If time truly equals money, and we all know it does, the above three reasons show how a polyurethane repair can keep downtime to a minimum and maintain an efficient workflow, thus keeping the bottom line in order. When comparing estimates of various repair methods, don’t get stuck on the dollar figure, always compare the total repair plan and what it could cost on the back end.

Sales, Chess, and Your Mindset 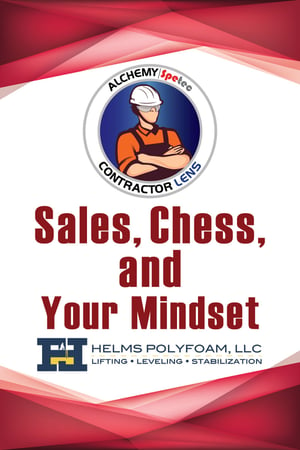 This post is part of the Alchemy-Spetec Contractor Lens series, featuring views, news & case studies written by our customers.  This sales article, written by J.R. Crowell of Helms Polyfoam, emphasizes the general importance of having a plan of some kind in place before calling on a prospect.  If you're an Alchemy-Spetec customer and you'd like to discuss writing content for our blog, please send an email to marketing@alchemy-spetec.com today!

I’ve not been formally trained in chess - but from what I’ve gathered in my limited time at the board, chess is very much a strategic game that requires a forward-thinking mindset. Each move could draw a certain action from the opponent and with each move, you the player need to be seeing five steps ahead. You need to have a follow-up play for each play your opponent could make and you need to be able to see the possible outcomes of all of those. That’s a lot of possible scenarios. Selling is no different.

Prior to walking through any door to visit any potential client (I’m assuming a cold call here), you need to have a clear reason for your visit and a clear outcome you intend to achieve with each visit. I once had a coworker who constantly said, “hope is not a plan”. How true is that? Walking in with only hope sounds like this; “I just wanted to come by and introduce myself as the rep for ABC Company…” You’re probably going to get a sideways shrug, maybe a “nice to meet you”, and a “see you later” shortly thereafter. Your actual intentions were to probably find the correct point of contact to discuss the needs of that business as they relate to your product or solution. At least that should have been your goal.

Don’t disguise your intentions with some backhanded intro because you think it eases the tension. Whomever you spoke to first is a professional at their role. They have duties just like you do. They are human and most humans want to be spoken to directly. They also subconsciously assume you are a professional in your field and assume that you know how to ask for what you want. As salespeople, we are typically natural leaders. It is our job to lead every discussion we have. That doesn’t always mean we lead by talking so don’t take that as an open invitation to dominate a conversation.

How does this tie into chess and foreseeing possible outcomes? If all you have prepared is the “make an introduction comment”, what are you supposed to follow up with? Lack of preparation makes it difficult to get to where you really want to go. Once you've made an introduction without thinking through your follow up options, then you’ve done what you said you wanted to do, so you may as well say goodbye to a response with any meat on the bone…

You need to go in with a clear understanding of what you expect to get out of that call as it pertains to helping that customer solve a problem and growing your customer base. You need to be prepared for several possible outcomes, including but not limited to getting that two minutes with the decision-maker. Be confident, be prepared, be a leader, be an expert. Your customer expects and deserves that much.