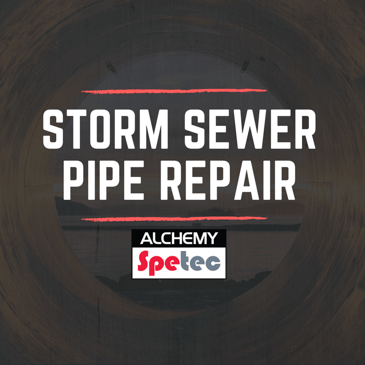 Kiawah Island, located in Charleston, South Carolina, is home to about 5 championship golf courses. On this island there are a lot of corrugated metal storm sewer pipes that carry water from place to place. Many of these underground storm sewer pipes began to leak due to decay caused by aging.

To start this repair, the contractor used inflatable dams to stop the water from going through the pipes.  We then advised them to drive 8 foot long grout probes into the ground along the outside of the 72 inch sewer pipes. These probes were used to penetrate the surrounding soil and start plugging the active leaks from the outside with Alchemy-Spetec H100. With the inflated dams in place diverting the water, they were also able to climb inside the sewer pipes. While inside they pumped H100 through to the other side of the pipe, out into the soil. Next, they used spin casting to seal off the inside of the pipes. Spin casting is a method in which a small machine with a hose on one end spins around in a circle shooting a coating material to seal the pipe off after grouting.

With a combination of probe grouting and spin casting, they were able to complete this storm sewer pipe repair and ensure leakage no longer occurred.