Nowhere on earth are they building more railroad lines than in the People’s Republic of China. The most populous nation in the world is developing rapidly and with it comes a need for more and more freight and passenger rail - and the demand for higher and higher speeds. Unfortunately, these high speeds cannot be achieved on rail that is sinking and settling in various places, especially in tunnels. This slows down people and commerce and is also a concern for safety. The culprit is groundwater, soil consolidation, and in some cases poor compaction. This is the type of environment where AP Lift 475 has done some of its best work. 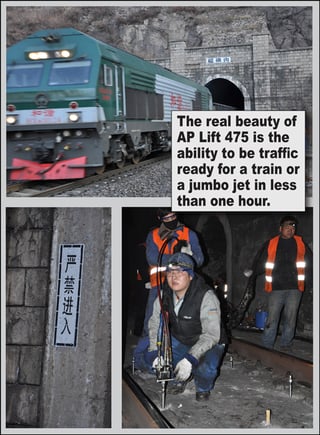 AP Lift 475 is a two component, hydrophobic, structural lifting polymer designed for airport, highway, and railroad applications. It can be used to stabilize structures, fill voids, and lift slabs supporting tremendous loads. The real beauty of it is the ability to be traffic ready for a train or a jumbo jet in less than one hour. A few years ago, it was put to the test in tunnels in the mountains of China.

With rails sitting on double concrete slabs (the top slab was 1 meter thick, the bottom 30 cm) a plan was developed to bring the low spots back into tolerance by injecting AP Lift 475 underneath both slabs through extra-long injection packers.

Monitoring with laser levels, the low spots in the rail were lifted back to the original grade. AP Lift 475 performed as advertised. The railroad track was raised and supported, while at the same time the ground water was displaced, literally jetting out of relief holes as it sought a place to escape.

Working in 4 hour windows where the rail traffic is shut down at night, crews lifted low spots in these tunnels quickly and efficiently.  At 5 AM equipment and personnel had to be clear of the tracks and 15 minutes later the trains would rumble through.  Vibration monitoring by railway engineers showed a smoother ride and the people and commerce of China were allowed to move once again at a frenetic pace.