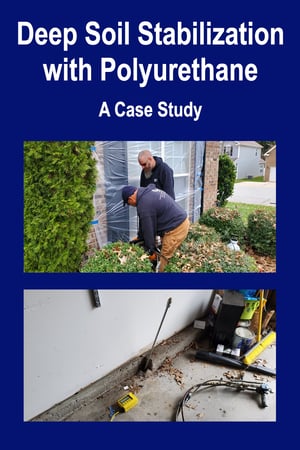 I'd like to share a case study from a recent job that I consulted on with one of our contractor customers.

A two-story residential house in North Carolina was built on poorly compacted fill dirt. After about 20 years, it began showing evidence of settling. Interior cracks appeared in the sheetrock and some of the floors were no longer level (indicating that the footings were slowly sinking). These symptoms of unstable soil were caused by about 1 inch of settling. The engineer on the project determined that the problem was not severe enough to require helical piers. The contractor was called in to stop the sinking and reinforce the soil via deep soil polyurethane injection.

Among the most dependable products for geotech applications, AP Lift 440 structural foam provides an exceptional DOT grade solution for these types of situations. This 4 lb. density, high-strength, hydro-insensitive structural polyurethane foam is perfect for densifying soil and stabilizing foundations (as well as lifting).

I worked with the contractor to draw up a plan, indicating exactly where the injection points would be located. The engineer reviewed the plan for feasibility. The contractor installed 18 injection tubes to a depth of 7 feet. 50 lbs of foam were administered through each tube, split between two different depths: 7 feet and 3.5 feet below grade. First, they injected from outside the house, installing foam beneath the exterior footings. Next, they injected from inside the house, installing foam beneath the load bearing interior walls. Spacing between injection points was approximately 5 feet.

The deep soil stabilization process densified the soil and stopped the settlement. In addition, the contractors achieved a half inch lift from the exterior injections and another half inch lift from the interior injection sequence. The customer was extremely happy with the results. The engineer was impressed as well and said he would recommend this procedure in similar future scenarios.