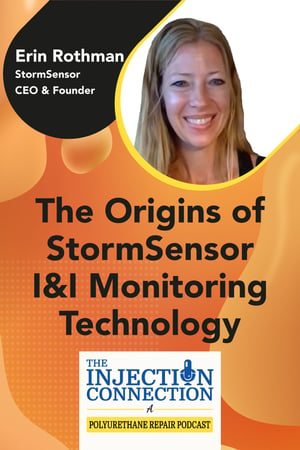 This article is an excerpt from Episode 13 of Alchemy-Spetec's podcast The Injection Connection, featuring Erin Rothman - Founder and CEO of StormSensor. (If you'd rather view or listen, an audio/visual version of this excerpt is posted at the bottom of the article.)

Charlie Lerman: How did you get into this and how did you end up starting Storm Sensor?

Erin Rothman: I think everyone's dream is to work in a sewer, so, of course, we start there! But I was a Vice President at a consulting company in Seattle, circa 2010-2011, and we brought in a stormwater group. For the first time in our company's history, we were losing money and we couldn't figure out why. When I talked to my stormwater team, they said that every time it rained at the office, they had to go out and sample their sites. Just because it was raining here doesn't mean it was raining there. So, they're going out like four times before they can collect a sample. And I said, "That's the silliest thing I’ve ever heard." Why don't we just have a rain gauge that texts us when it rains? And they said, why don't you go invent that? And I said, I will, I'm going to call it StormSensor. That's how it started as a little sparkle in my eye, but I had no hardware or software experience at the time. And I didn't know if I could even begin to put together a company like that. But as I started talking to more people in the stormwater industry and learned that there was a lot of frustration - and so much of it related to not knowing what was going on within these systems, I realized that maybe I could solve this problem with a team of brilliant people who could actually build the things that were in my head. That's how it started.

Erin: Yeah, I started with construction and industrial compliance because that was my background. And I started talking to cities and so many of them said they just needed to know how much water was moving through their storm system. That it wasn't metered and they didn't know. That just opened up a world of opportunity to me.

Charlie: Wow! That’s excellent. When you deal with below-grade infrastructure, there are a lot of needs but they're not really well defined. Nobody even focuses on them because it's out of sight out of mind. And I often say even for grouting, Alchemy-Spetec's biggest competitor is not another grout company - it's ignorance. People just don't understand that this kind of technology, these types of repairs (or your monitoring system) are even out there. And I think that's because municipalities are on tight budgets obviously. We want them that way, we don't want to just throw money at them. We want them to use the funds correctly. But you get a lot of people who start off at low-level positions in municipalities and then there's turnover, they move up, they go on to other things. And a lot of information is lost there. So, it's not necessarily that the government's just bad. It's kind of the nature of it, we all want to grow in our careers but these things get left behind.

Erin: Absolutely. And then the people paying for it, the citizens and taxpayers, want to see the benefit of what they're spending their money on. If you can't see it, then why would you pay for something that you can't see, that you can't understand? If you wait to fix it is once it stops working, it's too late because you're dealing with flooding and backups and paying too much for treatment and everything else.

Charlie: Oddly enough, it’s going back to that study I mentioned earlier in this interview, the 188 million dollars for I&I repairs - paying that is actually the easy part of it. What it comes down to is that inflow also causes damage to infrastructure. You see sinkholes and damage to property, potentially harmful or life-threatening conditions. And then, when these systems overflow, you're putting septic out there in the public, damaging our waterways and our health.

Erin: Yes, and sometimes even our homes and our businesses and the people who live and/or work there. It's becoming a lot more common.