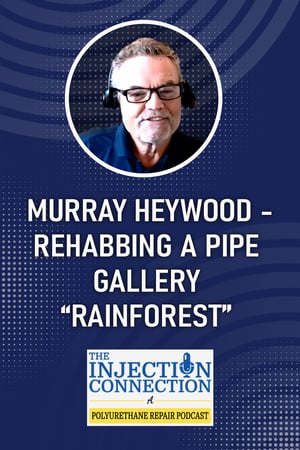 This article is an excerpt from Episode 14 of Alchemy-Spetec's podcast The Injection Connection, featuring veteran coatings expert Murray Heywood. (If you'd rather view or listen, an audio/visual version of this excerpt is posted at the bottom of the article.)

Charlie Lerman: Now what would you say is maybe the most interesting job that you've been on - or unique or weird - or something that just stands out in your head (with grouting obviously)?

Murray Heywood: Well, I should have been more prepared for that question because I’ve been on so many projects. But one of the things that struck me a few years ago was at a water treatment plant in New Jersey. I was in the pipe gallery. You've got to remember, in the pipe gallery you have tanks on either side of you, and possibly tanks above you - all filled with water - none of which are lined. They're all just bare concrete. I’m walking through this because we're there to look at the pipe. They've got all this corroding pipe and they're kind of perplexed. These pipes are severely corroding, with all these issues and I’m walking through this huge pipe gallery. It's huge, it's long and wide and they're worried about their pipe. And meanwhile, there's water spraying and dripping and coming out of every pipe penetration and crack. It's like a rainforest in there basically. Have you ever been to Niagara Falls and been behind the falls?

Charlie: I haven’t, but my wife has.

Murray: Yeah, you can go behind the falls. It's kind of like that. And there's water coming out from everywhere. I say, "We can address the corrosion and take it off and repair it and do all that stuff, but you've got to fix this leak." They look at me and say, "Well, it's a water treatment plant." I reply, "Yeah, but this doesn't have to happen. This is not normal. This is not just part of the normal day that you just let water spew in and all over the place and expect to have good results." So I made a recommendation.

Murray: And I think they actually addressed all of that in there, but I was just struck by how oblivious to it they were. There was so much water coming in. And then there was another situation here in Canada at a plant north of here. They had another situation where they had a tank on one side and a pipe gallery on another. Now in the previous example from New Jersey, the pipe gallery wasn't painted, the walls weren't painted, it was just a concrete room. In this one, they kind of wanted to dress it up, so they kept painting these walls. And every time they'd paint the walls, all these leaks were happening and the paint would come off. They must have to put like 40 coats of paint on this thing. Then I walk in one day and I say - because the paint was now at this point with all the peeling - "Yeah, this is always a problem. Well, it's not the paint that's a problem. It's the fact that you've got all this water coming out all over the place." And they reply, "Well, we've tried to stop it but we don't know how." So I gave them some instructions on how to do it. They got somebody in, I don't know who, and they fixed it. I’ve talked to them since then and they haven't had any further issues. So it's just that. As I said, it's the lack of education that there's a fix out there. And let's be honest, it's not rocket science, it's a relatively simple fix.