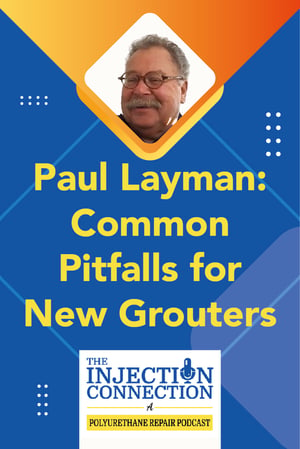 This article is an excerpt from Episode 11 of The Injection Connection, featuring a highlight from the landmark conversation between retired industry legend Captain Grout (aka Paul Layman) and his number one protégé and unofficial successor, The Grout Geek (podcast host Charlie Lerman). If you'd rather view or listen, an audio/visual version of this excerpt is posted at the bottom of the article.

Charlie Lerman: What are your top, maybe one, two or three common mistakes you see when people get into grouting?

Paul Layman: I think they get overambitious and say, “We can fix this and we can fix that,” or they don't have quite the right knowledge or they don't recommend the right product. Like one of the projects we were on, they were going to recommend an acrylate. And really it wouldn't have worked well for an acrylate because the way it was designed, it was about 50% water. That's probably the thing, they overthink the job too much. It's a fairly simple process but you don't want to overthink it. Just be straightforward and just take your normal steps and work from there because the products really work well and depending where you're at you can massage these products and change them in the field if you have to, but the simpler the process, the easier it is.

Charlie: Right and that's real important. Jim (Alchemy-Spetec VP Jim Spiegel) likes to use a term, he calls it fail forward. And I like that. Fail is not necessarily maybe the right exact term for grouting but there's a lot of theory crafting where people say, “Oh, well, we know in a lab the grout does this, this and this.” And then they assume that they have lab conditions out there in the field. And you don't. You have field conditions; you don't know what's out there. So, all the theory crafting you do, until you get out and actually pump some grout and see what you've got going on, it's all guesswork at that point. I think that kind of ties into what you're saying there.