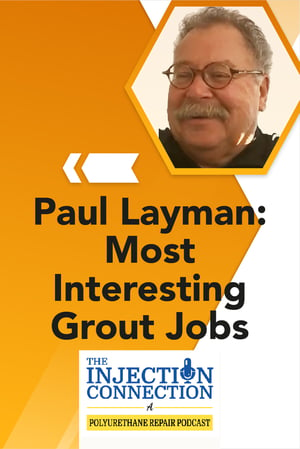 This article is an excerpt from Episode 11 of The Injection Connection, featuring a highlight from the landmark conversation between retired industry legend Captain Grout (aka Paul Layman) and his number one protégé and unofficial successor, The Grout Geek (podcast host Charlie Lerman). If you'd rather view or listen, an audio/visual version of this excerpt is posted at the bottom of the article.

Charlie Lerman: What are some of the most unique and interesting jobs that you've been on?

Paul Layman: Well, we did the Hoover Dam and we did the Seattle tunnels. But on the job I did up in Canada on the water system for the city of Vancouver, we were in shafts that went down 1800 feet, 600 meters. When you get down there, it's pretty dark and cold and when the pumps go off or the electric goes off, it gets pretty dark. Those are some of the neat projects. Then of course, the projects we did up in Alaska, above the Arctic Circle. We did a huge tank up there for CH2M Hill. The tank was over a million gallons and we had to stabilize the whole bottom underneath it, over permafrost! We had to fly everything up in an airplane of course and then unload it. And the mechanics up there, the kids at work, they were just as smart as could be. They knew how that structure was going to work. And so, from Arizona, the Salt River Project down along the Colorado all the way to the Arctic Circle -  and then being in gold mines...every structure was different and neat. It was a challenge. It was fun because you met a lot of neat people and a lot of characters too. Everybody had their little niche and it was just a neat job. It really was. It wasn't work, it was every day you got a new adventure.

Charlie: A lot of times when you talk to people in the grouting industry, and maybe I'm biased because that's where I've been for the last 15 to 16 years, but they're passionate about it. They find it interesting. It's not just the standard, "I'm just going to apply a coat of this and we move on to the next tank" or something. It's always unique. You brought up some remote sites there and I found it interesting in my career where I've had engineers talk to me about a project and I'm like, “Well, that sounds like you should do cementitious grouting.” And it turns out not to be cementitious grouting just because of the remoteness. They can't get concrete out to a site or something like that. I've seen urethane jobs where just because of mobilization they had to use the chemical grout. So, it's not always the most cost effective when you compare materials but, when you need mobilization then the chemical grout comes in.

Paul: One time we had to go out to the Aleutians. And we put I think about 15, 20 pails of grout in the airplane and then we put in another 15 pails of fuel. We had to put the fuel in the airplane too because we got out on the islands and they had to get themselves back. So, we had the grout and the fuel, and the plane had to carry all of it out there.

Charlie: That is so cool.

Paul: When we got out there, the guys pull out the 15 pails of fuel and start fueling the airplane up so they can get back. They leave us with our grout there on the Aleutians. It was just neat stuff like that, along with the people you meet out there.

Paul: And all the equipment we put in big trunks. What we didn't take with us we weren't going to find at the local hardware store because there were none for a thousand miles.

Charlie: That is real important and specifically there. But it's similar even when you're just a couple miles in a tunnel and just the 20 minutes to get back out to get that screwdriver your team forgot. So, it's important to make those lists and know what you need to have.

Paul: Yeah. We were doing a mine up in Alaska and the grout started getting away from us. We were down two miles in the mine but luckily, we had enough catalyst and cleaning agent that we could save the grout and the pump, because otherwise we would never have time to take it up to the entrance and fix it. We would have lost a pump and we're 100 miles, 200 miles from the closest civilization. So, we would have been toasted up there. Again, those are things you just learn after the years of doing this stuff.