Just outside Saskatoon, Saskatchewan is a 12,000 square foot cement manufacturing plant that was being re-purposed for use as an agricultural seed sorting facility.  Built in the 1960s, the plant’s 10” thick, double rebar, 8000 psi concrete floors had settled.  An undetected broken water main on an adjoining property had been pumping thousands of gallons into the soil for years causing the floors to become independent of the footings which had sunk as much as 7 inches.  The new owner’s plan to demo the slabs – including some as large as 52 feet by 25 feet – and replace them came to a screeching halt when they proved to be too tough for even a track hoe mounted jackhammer.  All of the high tech seed sorting equipment was still sitting on pallets and couldn’t be installed until the floor problem was resolved.  With harvest season fast approaching, a mudjacker was hired to lift the slabs with cement grout.  This effort proved unsuccessful in that the final levels were not accurate enough, leaving the property owner in dire circumstances. 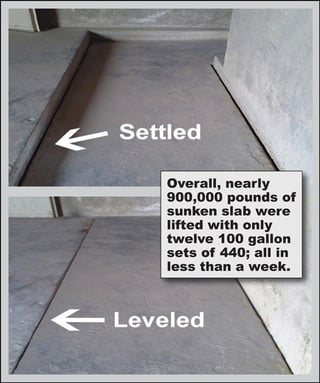 Among the most dependable products for leveling concrete slabs, AP Lift 440, provides an exceptional DOT grade solution for these types of situations. This 4 lb. density, high-strength, hydro-insensitive structural polyurethane foam is perfect for lifting and supporting heavy concrete floors that have settled due to water infiltration.

An Alchemy-Spetec certified contractor lifted 5 slabs and fine-tuned 3 others that the mudjackers had unsuccessfully attempted with cement grout.  Overall, nearly 900,000 pounds of sunken slab were lifted with only twelve 100 gallon sets of 440; all in less than a week.

The level of precision achieved with polymer foam was not only far greater than anything the mudjackers were able to deliver, but the rapid results allowed for the heavy seed sorting equipment to be installed on stable floors just in time for the fall harvest.  The floors are still perfectly level to this day.