Reinforce Your Seawalls for Hurricane Season 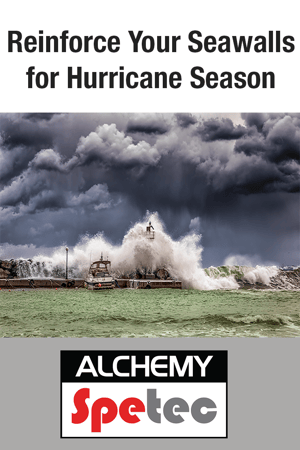 The month of June kicks off hurricane season and the forecasters are calling for a higher than normal level of activity (don’t they always?). Last year I posted a blog noting hurricane season arriving and I had no idea how prophetic it would turn out to be. 2017 brought some of the worst hurricane damage in years to the United States.

After the storms, of course, there was a flood of phone calls to both Alchemy-Spetec headquarters and to our contractor network. Homeowners and businesses on the water suffered catastrophic damage to their seawalls and bulkheads. The city of Punta Gorda, FL alone lost over 9 miles of seawall with another 17 miles damaged. The bright spot of all this was what we discovered when we inspected seawalls that had been grouted with polyurethane. These particular seawalls held up remarkably well.

Here’s what we learned in the aftermath:

Many people that live or work on the water often observe sinkholes that develop on the landward side of the seawall. Tides, wakes, and heavy rain events create hydrostatic pressure that is constantly trying to equalize on both sides of the wall. If water behind the wall cannot relieve itself through drains or weep holes, it will force its way beneath the wall carrying soil with it. This is called “piping”. Over time these pathways will funnel more and more soil out from behind the wall, creating sinkholes and dangerous voids.

Last year, especially with Irma, the eye of the hurricane was off the west coast of Florida and it created a
huge sucking action. You probably saw footage of Tampa Bay being emptied by the suction. At the
same time, all those seawalls and bulkheads with the voids and the piping experienced panel rotation.
That is what happens when the upper part of the wall remains secured with a deadman or tieback, and
the lower portion of the wall blows out. After that it is game over for the wall and the entire property is
in jeopardy.

When contractors inject a seawall with Alchemy-Spetec polyurethane, they drive injection probes several feet below the toe of the wall. Permeation and void filling resins like AP Fill 700 penetrate sandy soil, plug up voids or piping pathways, and stop the loss of soil from behind the wall. We are literally building the seawall down instead of up, and it works!

If you have made a decision to live or locate your business beside the water, then you know too well the
risks. Consider having an Alchemy-Spetec certified contractor come by and evaluate your current seawall
condition. Remember, once a wall fails the entire property is at risk of being lost. I know adding a
couple more feet to the seawall cap is real popular these days but consider building it down this year
instead.