Sealing Leaks in a Historic Brick Wall with Spetec AG200 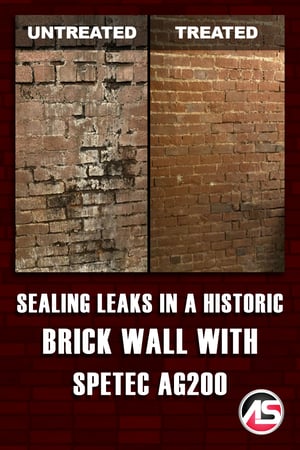 As the Director of Technical Services for the Leak Seal division at Alchemy-Spetec, I often find myself assisting customers with some interesting jobs. Such was the case when I was called in to consult with a contractor who was sealing a leak in a historic district below-grade, multi-course brick wall. As is often the case with below grade, historic spaces, water infiltration was unsightly, gave off a musty odor, and was damaging to finishes. This was a very old brick wall, approximately 8 x 15 feet in size and at least three courses thick. The owner wanted to find a way to waterproof this vintage brick structure while at the same time preserving its unique appearance. In addition to the water flow issue, the leaks were causing mold/mildew on the walls.

We proposed injecting Spetec PUR AG200, a high-strength elastic acrylic injection resin, into the cementitious grout between the bricks where the water was migrating through. In order to monitor the efficacy of this leak seal job, we employed the QP Factor® leak seal testing and quality control system. As stated on our website, “The QP Factor® system offers quantifiable water flow, pressure, and flow/pressure metrics before and after leak seal injection that will provide clients, contractors, and design professionals the industry’s first patented method for proving Leak Seal® success.

The method of testing requires additional drill holes to be placed at pre-determined locations along the crack, joint, or substrate being sealed. Prior to injection of chemical grouts such as Spetec PUR F400, Spetec AG200, or Spetec PUR GT500, the test hole is connected to a digital touch-screen device that is calibrated to provide water pressure, flow, and flow/pressure information that is extractable in excel format from a convenient USB port.”

We ran the QP Factor® system on three test areas in the wall before beginning the injection process. This revealed to us the amount of water that was flowing through the wall. After injecting Spetec PUR AG200 into the existing cementitious grout around the bricks in two of those test areas, we ran the QP Factor® tests again and realized that wouldn’t have to inject the third area due to the efficacy of the Spetec PUR AG200.

Screenshots from the QP Factor program... 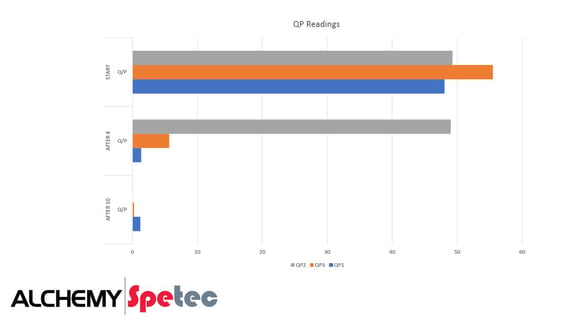 In addition to stopping the water flow, sealing the leaks made it possible for the bar owner to keep the walls clean in appearance. See the treated area of the brick wall vs a non-treated area.