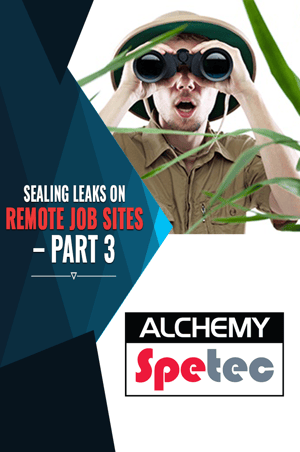 Welcome to the 3rd and final part of my blog post series “Sealing Leaks on Remote Job Sites”. In Part 1 and Part 2 of this series, I described a remote leak seal job I assisted a customer with and the unique preparations it required. So to pick up the story where I left off - there we were, in the jungle, about a mile from our trucks. Of course we were doing our best to deal with the August heat and humidity. At least we had poison ivy, ticks, and yellow jackets to keep us company as we tackled these pipe penetration leaks on the aerial manholes.

For this application, AP Seal 500 was the right choice. It reacts when contacted by water, it's flexible, and it bonds tenaciously to concrete. Plus, its low viscosity allows it to get into tight cracks and voids to seal off leaks. If there is water present in the cracks, it can be injected straight. We actually injected it with water using a two chambered cartridge and static mixer. One chamber held the resin and the other was filled with water just prior to injecting. The reason we did this was because we were working during the middle of the day when sewer flow was the lowest. There was no leaking water present in the penetrations so we had to provide our own. Injecting with the water provided the “kick” to make the urethane foam expand and form an excellent seal between the front and back oakum gaskets we created.

Although it was not in the contract, we couldn't ignore the other small leaks through the manhole walls. Plus we wanted to help the county in return for their clearing the footpath to the manholes. These particular leaks were below the pipe penetrations and were constantly seeping sewage water. There were literally hundreds of yellow jackets swarming on the wet manhole face but they didn't bother us. To repair these leaks we drilled port holes that would intersect the cracks at an angle. As always, we flushed out the holes with clean water. As an experiment, we only put in a couple ports and then started injecting the same polyurethane; this time without additional water as there was already water present in the cracks. Sure enough, the low viscosity resin traveled throughout the cracks as it was injected and sealed off the areas where water was working its way through.

When we were finished, the manholes were completely dried out and there was no longer sewage leaking into the sandy soils beside the creek. It always feels good to get a job done when there's the added benefit of doing something to protect the environment. It also feels good when a project goes smoothly because you took the extra time to visualize it, plan the work, and work the plan.