Signs a Seawall is in Need of Repair

Salt corrosion, tidal action, currents, boat wakes, storm surges and sometimes hurricanes all deliver a constant beating on the seawall. Contrary to popular opinion, many of the forces also come from the side of the wall facing the land. Did you realize that rainfall/storm events create more hydrostatic pressure than rising and falling tides? Every time it rains or the irrigation system runs, and every time the tide goes out; all of the groundwater above the waterline needs a place to vent or equalize. Massive pressure can build up if that water is trapped, making it impossible for it to drain into the sea or storm water system. That is a recipe for disaster which can easily be avoided with proper surveillance. Let's take a look at some of the external signs a seawall is in need of repair...

Small Sinkholes Near the Wall 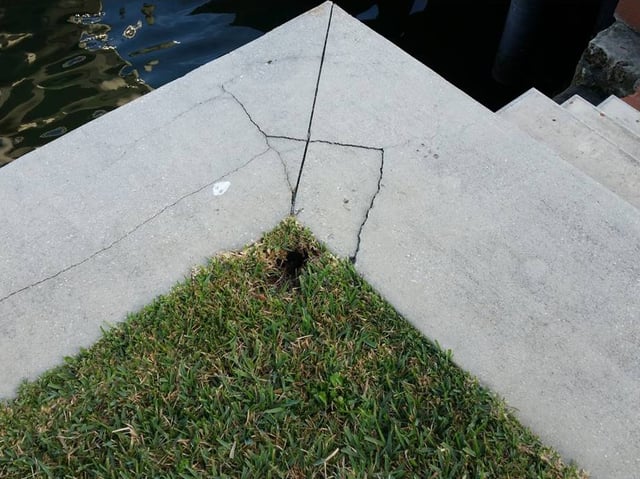 In landscaped areas, evidence of soil erosion is often quite obvious.  In this photo you can see that there is a small sinkhole developing at the inside corner of the seawall.  Some types of grass will actually keep larger sinkhole from being seen.  So check thoroughly.

Voids Near the Edge of the Wall 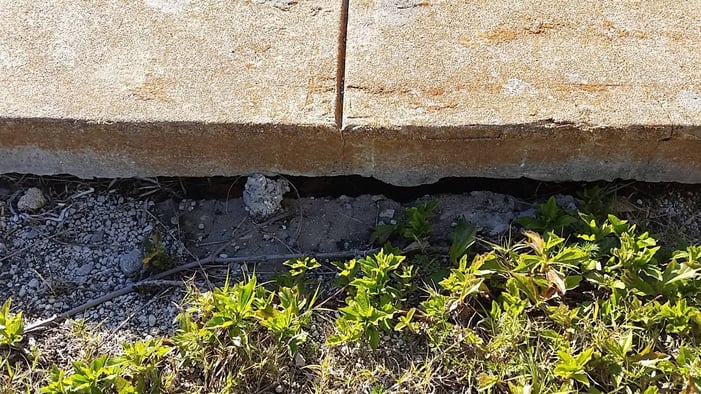 Obvious settling soil should have gotten the property owner’s attention in this case.  Too often, they ignore the warning signs until something more catastrophic occurs. 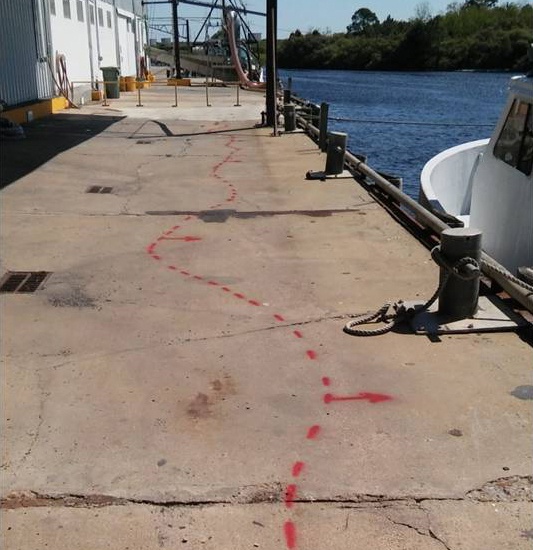 Here, ground penetrating radar revealed loose soil zones beneath this concrete apron outside of a fish processing facility.  The steel sheet pile walls were losing soil and huge voids had developed.  Evidence of cracking concrete was not enough to get their attention as is often the case.  However, when a Lull forklift went through the slab, everything but foot traffic was prohibited from being on the apron.

Damage to Structures Up to 100 Feet Away 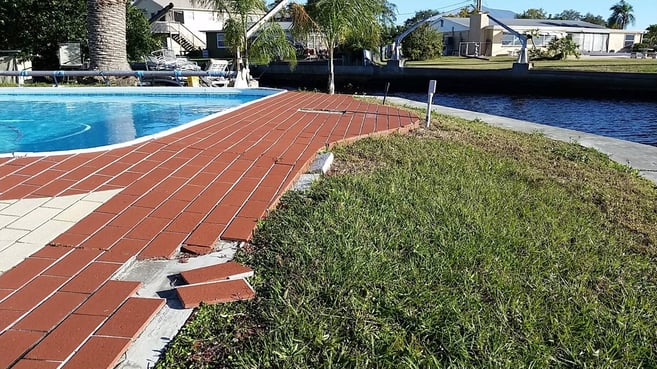 Capillary pathways of leakage can be found over 100 feet away from the visible leak, depending on the soil matrix.  The back of this pool deck had dropped about 6” already as the yard slumped towards the leaking seawall.

Causes of Seawall Damage – An Overview

Correct construction of a seawall will include a drainage system to handle the bulk of the water that comes from rain in addition to check valves, weep holes, or seams to handle the daily influx and outflow from tide and wave action. Although these systems are designed to retain the soil behind the seawall, over time the materials degrade or can be disturbed by settling.

This is a direct symptom of normal wear and tear from the natural environment and is unavoidable. The result is a loss of soil and the inevitable sinkholes and / or low spots that will occur along the wall. Other times, the weep holes and vents become clogged and the water has no way to escape except to force its way down and out from underneath the base of the wall. When this occurs there will again be sinkholes and sometimes wall failure.

When signs of sinking ground are observed, you can almost be sure there are voids below that are that are not seen from the above the surface easily and are indeed dangerous. Sometimes these voids can extend below an adjacent patio, dock, or pool deck, causing those to sink and crack as well. The key to keeping those problems at bay is to actively anticipate them.

If you live along the water, it is always going to be man against nature. That seawall is keeping your property from damage and from disappearing altogether. The key to extending the life of your seawall is the advanced polyurethane technology from Alchemy-Spetec. For more on the repair process itself, read An In-Depth Look at Polyurethane Seawall Repair. It's fast; clean, easy to install, and most of all, effective.