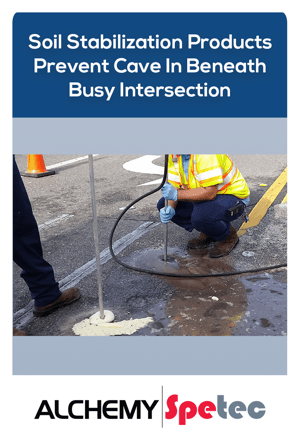 County inspectors found a depression in the road due to an underground sewer line that wasn’t sealed at a heavily trafficked roadway intersection in Orange County, Florida.  Water and eroding soil were infiltrating the sewer line causing the road to slowly settle.  The resulting voids around the drainage structures had the potential to grow larger, eventually resulting in a complete cave-in of the roadway.  In this particular case, there was a patch of asphalt 12’ x 25’ that was settling and officials feared a cave-in would occur.  A point repair was done from within the leaky pipe to stop the infiltration but they feared it was only a matter of time before the road gave way. It was going to be very difficult and inconvenient to dig up this roadway, fill the void, re-compact, and re-pave due to the high volume of traffic, the adjoining rail crossing, as well as several major utilities running through the area.  Not to mention that the area would have to be completely shut down to accommodate all of the equipment required for such a repair.

Orange County approached us to see if we could come up with a powerful, painless and rapid solution for their maintenance crew using chemical grouting to fill the voids and stabilize the roadway. We devised a solution for them using the versatility of AP Fill 700 as both a permeation and void filling grout.

We advised their crew to lay out a grid on the settling asphalt area and set up injection points to drive pipes down to the 13’ depth where leaking had occurred and where the loose soil zone was located. They monitored the pipes while injecting material at a rate of 2 gallons per vertical foot through the open manhole to identify additional leaks that had been missed during the first point repair. As expected when foam was observed coming in through a leaking joint it quickly sealed off the leak at the same time it was stabilizing the soil.

To keep the lane closure down to a bare minimum of time, the project was successfully completed on two separate Saturdays.  The voids were filled, the loose soil was solidified, and only minor asphalt patching was required to make that area smooth for traffic again.