Stop Erosion Through Your Seawall with Polyurethane 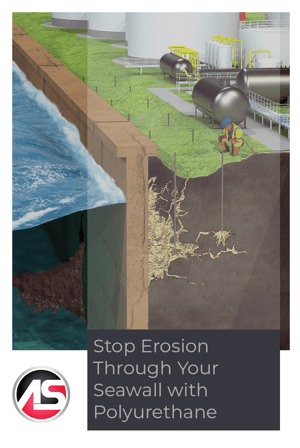 When it comes to seawalls, there is a lot more to learn than meets the eye. A seawall is like a living, breathing thing: especially in the way that it is designed to function. But like all living breathing things, they have a finite lifespan. For many of them, it's a mere 20 – 30 years. Depending on where you live, replacing a seawall can cost anywhere from $150 to $500 per foot. That's enough for some homeowners to choose to move instead of rebuilding their seawalls. Today however, signs of seawall distress can be solved before they get too bad through the application of polyurethane grouts to seal leaks, fill voids, and stabilize the surrounding soils.

Although seawalls are found around lakes and rivers, it is around the ocean that they are put to the most difficult test. Salt corrosion, tidal action, currents, boat wakes, storm surges and sometimes hurricanes all deliver a constant beating on the seawall. But many of the forces are also coming from the landward side of the wall. Every time it rains or the irrigation system runs, and every time the tide goes out; all of the groundwater above the waterline has to vent or equalize. Tremendous pressures can build up if that water is trapped and cannot make its way into the sea or the storm water system.

Correct construction of a seawall will include a drainage system to handle the bulk of the water that comes from rain in addition to check valves, weep holes, or seams to handle the daily influx and outflow from tide and wave action. Although these systems are designed to retain the soil behind the seawall, over time the materials degrade or can be disturbed by settling. The result is a loss of soil and the inevitable sinkholes and / or low spots that will occur along the wall. Other times, the weep holes and vents become clogged and the water has no way to escape except to force its way down and out from underneath the base of the wall. When this occurs there will again be sinkholes and sometimes wall failure.

When signs of sinking ground are observed, you can almost be sure there are voids below that are unseen and dangerous. Sometimes these voids can extend below an adjacent patio, dock, or pool deck, causing those to sink and crack. Anticipating those problems is key to keeping those problems at bay, and proper application of polyurethane injection is the solution. AP Fill 700 is a lightweight injection resin that can be injected along the wall where the settling is occurring and generate multiple benefits. It will seal any leaks along the wall, fill the voids that have occurred, and mix with the soil to form a solid, impermeable mass. Combined with proper drainage, this method can extend the life of your seawall.

If you live along the water, it is always going to be man against nature. That seawall is keeping your property from damage and from disappearing altogether. Advanced polyurethane technology from Alchemy-Spetec is a key to extending the life of your seawall. It's fast, clean, easy to install, and most of all, effective.