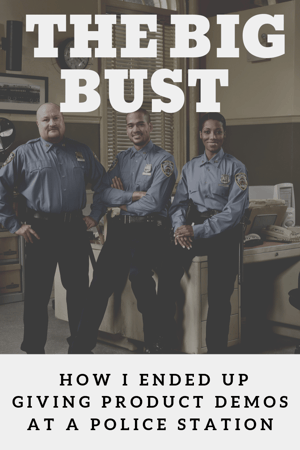 Ready for an entertaining story?  Well, buckle up, because this is a good one.  As the Western Regional Rep for Alchemy-Spetec, I usually keep product samples and mixing supplies in the trunk of my car.  I recently took my car in to the dealer for an oil change.  My girlfriend drove me home after I dropped the car off.  A few hours later, we picked the car up, went home and started getting ready to attend an Arizona Coyotes hockey game.

I checked my voicemail after getting out of the shower.  I was surprised to hear very frantic sounding messages from my parents, the dealership, and um...the police!  My mother's voicemail went something like this: "Michael!  The police are at our house questioning us about possible bomb making supplies in your car?!!  What's going on?!!"  The message from the dealership was a bit more measured: "Michael.  You need to call us back IMMEDIATELY.  This is extremely serious.  Please call us the minute you get this voicemail."  It all became clear with the next message from the police department: "This is officer (name withheld for obvious reasons). I have a report that there were some suspicious chemicals in your trunk. Give me call at your earliest convenience."

I called the officer back first, at the number he provided.  I got his voicemail, so I left my explanation and contact info.  Then I called my mother to calm her down.  Finally, I called the dealership for a full explanation.  The manager, who knows me well and knows what I do for a living, laid it all out for me.  Apparently, an employee who doesn't know me too well decided to take a look in the trunk while they were doing the oil change.  Alarmed at what looked like suspicious chemicals, he quickly slammed the trunk shut, not sure what to do.  He said nothing to management.  His shift ended shortly thereafter.  He met up with some friends and told them this exciting story about possibly finding bomb making chemicals in the back of a car he was working on.  One of his friends became concerned and alerted the police.

Meanwhile, I had tickets to a hockey game.  I had replied to the officer's message, and with the knowledge that they had already been in contact with my friend who managed the dealership, I figured it was safe to catch the Coyotes game.  I would follow up again afterwards.  After watching my hockey team kick some butt (yes, we won), I was back home settling in when I heard a knock at the door.  It was, of course, the police.  To be honest, I was relieved to finally be able to explain everything directly to them.  I invited them in and started showing them product samples, etc.  They seemed to believe me at this point, but still asked me to come down to the department and do some mixing demos to show them exactly how the products work.  So, I did!  And that, my friends, is how I ended up giving product demos at a police station.  I can now rest assured that, if they ever have any concrete slab, soil or waterproofing issues - I will be the first person they call!  Who said working is chemical grouts wasn't exciting?