The History of Concrete Slab Lifting: A Timeline Perspective 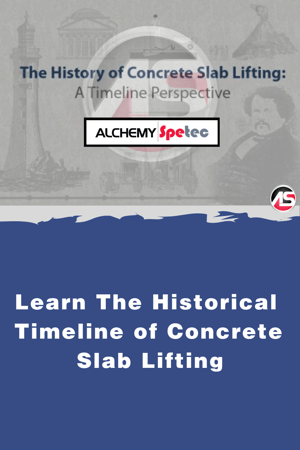 Whether the culprit is poorly compacted or eroding soils, excess moisture from leaking HVAC systems, too little moisture brought on by drought, or just a sinkhole no one knew about until it opened its gaping maw, concrete slab settlement is a fact of both life in general and the construction industry in particular. And one that has to be addressed before it creates bigger, more costly issues.

Concrete slab lifting is a unique solution to this age-old problem. In a process also known as slab jacking, sinking concrete slabs are lifted and leveled, most frequently these days with the aid of a high-density polyurethane foam.

Though simple enough in theory, slab lifting is a fairly remarkable feat that allows residential and commercial property owners the option of repair versus a total rebuild. Below is a timeline of the early foundations of concrete, and how slab lifting has come to be a reliable, cost-saving means of putting sinking concrete slabs back on solid ground.