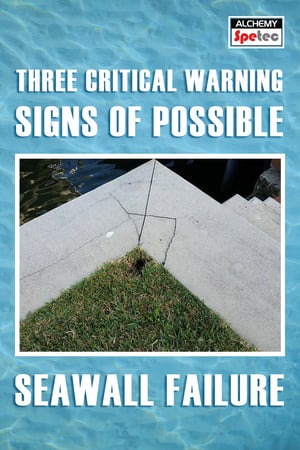 Storms, tidal action, and soil erosion constantly cause damage to seawalls. It is essential to identify any problems as early as possible. Here are the most common warning signs of seawall failure:

Weep holes function as a pressure-relief valve that allow for drainage of any water that gets behind a seawall. They are visible from the water side, just above the surface usually. A clogged or blocked weep hole could spell trouble. If you find debris in the weep holes, act immediately to prevent water pressure from building up and damaging the seawall.

Voids and/or Sinkholes Near the Inside Edge

In many cases, too much water leaks through to the inside of the seawall. Voids and sinkholes then appear on the land side of the wall due to a loss of soil underneath. Removing the grass near the edges of the seawall to expose possible holes is good practice.

Damage to concrete in a seawall can expose the interior steel rebar to water. Over time, the rebar (which structurally supports the concrete) can begin to rust and stain the surrounding areas. The added rust causes the rebar to expand, and cracks in the concrete begin to grow.

Many seawall issues can be resolved or even prevented with polyurethane seawall repair. Polyurethane can be injected through pipes directly into voids and loose sandy soil using small portable equipment. Polyurethane seals leaks along the wall, fills the voids that have occurred, and mixes with the soil to form a solid, impermeable mass.