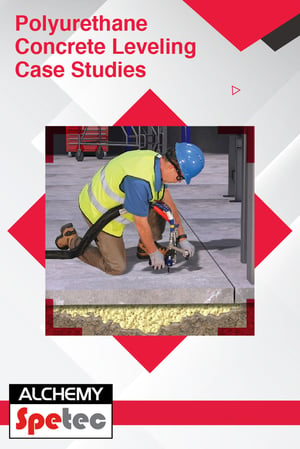 Surface erosion, water damage, shrinking from heavy loads, or void spaces in the soil can all cause commercial, industrial, and residential slabs to sink or, in worst-case scenarios, collapse completely. Even without catastrophic collapse, slightly uneven concrete can cause expensive damage to property, vehicles, and factory equipment - not to mention personal injury.

Polyurethane concrete leveling is often the most cost-efficient and durable solution to this problem. A technician simply drills 3/8-inch holes through the concrete surface. Then, injects one of the Alchemy-Spetec concrete leveling polymers with the MixMaster Pro slab lifting gun. As the foam expands, pressure on the underside causes the concrete to lift to its original level position. The slab is ready for traffic 15 minutes after installation. The repair is waterproof and strong enough to support virtually any structure. 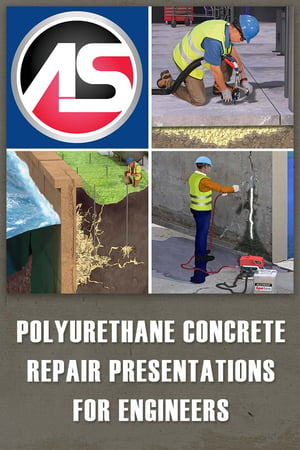 The Specialty Waterproofing with Chemical Grouts presentation covers sealing leaks in structures with the use of polyurethane chemical grout injection materials and techniques.

Alchemy-Spetec's one-hour CE/PDH accredited Seawall Repair Network presentation is ideal for engineers who are interested in designing superior seawall/bulkhead rehabilitation and preservation solutions. This type of environmentally friendly permanent soil stabilization and seawall preservation can be applied to all types of waterfront infrastructure.

Want info on scheduling a presentation? 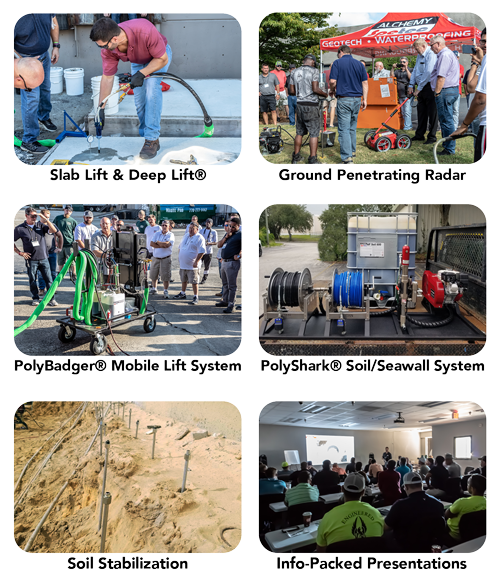 Why Your Garage Floor Slab is Settling 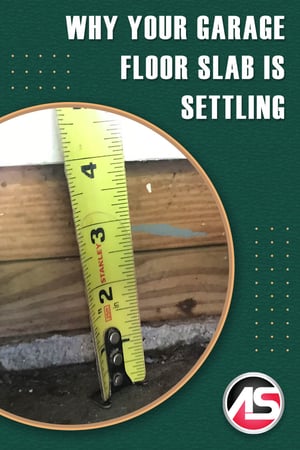 As with most slab settling issues, voids and poor soil compaction are at the root of the problem. This is certainly the case with sunken garage slabs. They are typically constructed by backfilling the area after the foundation is poured (or blocked) and pouring the concrete on top. Achieving proper and adequate compaction is often difficult and just not achieved in many cases. This, combined with time and freeze/thaw cycles creates voids under the garage slab. Concrete itself is heavy and can settle, but when we park vehicles on top of a garage slab that has voids under it? It is obviously a recipe for disaster!

Alchemy-Spetec can refer you to a contractor for a thorough site evaluation. A qualified contractor takes the time to properly inspect the issue, which generally entails probing the slab to determine if there is indeed a void and/or unstable soil (and to what extent). Gathering this type of information is key to designing a proper repair plan and calculating the amount of polyurethane lifting material needed.

Depending on the conditions found during site evaluation, there are a couple of different techniques the contactor may use (and oftentimes both). If the soil under the garage slab is soft and unstable to a certain depth, they may opt for the Deep Lift® method. The expanding structural foam creates a squeeze effect in the loose soil, essentially forming added support footings under the slab. The other injection method, Slab Lifting, entails going through ⅜-inch holes drilled directly through the slab. The same structural foam described above is used. The expanding foam travels the path of least resistance, therefore, filling all void areas as well as compacting any loose soil. Once the soil is compact, the expansion of the foam creates the power to lift the slab. Our high-density polyurethane cures to 90% in fifteen minutes – which translates to the slab being traffic-ready by the time we are packing up our equipment.

In the city limits of Atlanta, a couple was surprised to see a sinkhole forming in their home’s front yard. They became quite alarmed as within just a few weeks it swallowed their sidewalk and a decent portion of the property in front of the home. They notified the city.

After the City of Atlanta quickly got involved, some investigation revealed an old brick storm sewer running approximately 25-30 feet under the front of the property. Across the country, there is lots of brick infrastructure that’s still in service and in some cases over 100 years old. These outdated structures suffer from infiltration of groundwater which often erodes soil, as well as causes subsidence above. In this case, cameras revealed that several bricks had become dislodged, creating a pathway for soil and groundwater to get in. The end result was a rapidly forming sinkhole.

The City of Atlanta was already consulting with Alchemy Spetec on some other projects, so they asked us to take a look. After reviewing the available information and making a site visit, it was determined that a multi-step plan would need to be undertaken to seal the pipe and reestablish soil compaction.

The single-component polyurethane AP Fill 700 was selected for the sealing of the pipe and for the compaction grouting of the above soils. AP Lift 430 would be kept on standby in case further grouting was required to stabilize under the home foundation itself. As it turns out, this was indeed the case.

As previously mentioned, there were several steps that had to be undertaken to complete this project. First, the bricks that had become dislodged were reaffixed back into place. Once that breach was sealed, AP Fill 700 was injected through the pipe walls in multiple areas around the breach. AP Fill 700 reacts when it contacts moisture and there was no lack of that at 25 feet deep. Regardless, twin streaming through an F-Valve Assembly was implemented to ensure a good resin/water mix. This approach rapidly filled all of the voids surrounding the pipe and also sealed several other small areas of weeping water infiltration.

The second step was to fill the sinkhole with loose dirt and gravel and then permeate that with AP Fill 700 to squeeze the soil and lock all of the backfill together. Half-inch injection pipes were installed down to the top of the pipe, then soil and gravel were backfilled to the surface. Once the backfill was in place, AP Fill 700 was injected and the probes were slowly extracted to insure a uniform measure of polymer throughout the soil column. When this is done in a grid pattern, the result is a lot of increased compaction and bearing capacity.

Once the sinkhole was repaired, concern remained about loss of soil compaction under the foundation of the home. The steps leading up to the front porch had settled away from the home indicating further bad soil was likely the case.

Alchemy-Spetec is a dealer for Pagani, a dynamic cone penetrometer (DCP) manufacturer out of Italy. We brought our unit out to the property and did 6 penetrometer tests across the front of the home next to the foundation. Four of the six tests revealed weight of hammer (WOH) readings which basically means zero compaction. The soil could not even support the weight of our machine. The city was on site to see the tests and immediately approved the compaction grouting beneath the front foundation. This is where the AP Lift 430 came into play.

Half-inch injection probes were installed across the entire front of the home next to the foundation. Probes were installed down to 8 feet which is where the soil became much stronger. AP Lift 430 was injected while the crew slowly extracted the probes - until lift was observed on the home. When lift was detected, the grouting ceased. This process was repeated across the entire front of the home on 4-foot spacing.

After the compaction under the footing was reestablished, the front steps that had settled away from the house were lifted back into place using AP Fill 430.

The job was completed quickly without any excavation and dewatering. No curbs, road base, or utilities had to be removed or relocated. This approach saved enormous amounts of additional cost and delays.

Save Time, Hassle, and Money!

Spray foam insulation guns are made for the process of spraying foam at constant pressures. Slab lifting requires a gun that is designed to deal with changing pressures and backpressure without backing up or crossing over. 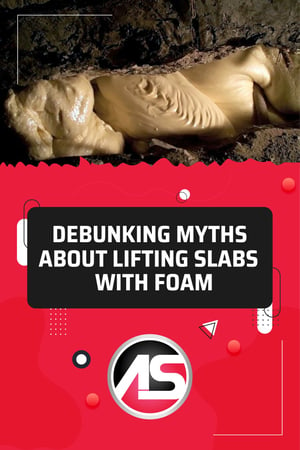 When parts of a concrete surface sink due to erosion and poor compaction, the resulting trip hazard can be dangerous. If left unrepaired, liability and safety issues linger. Although concrete is tough and durable, unstable soil can cause it to crack and sink. Fortunately, a reliable solution for lifting concrete has been developed and proven over the past few decades. High-strength expansive polyurethane foam is injected underneath the slab to bring it back to level. This method has been used in a wide variety of commercial and residential applications with long-lasting results.

Despite consistently reliable results, some myths about polyurethane slab lifting have cropped up over the years.

People who assume that polyurethane slab lifting is a temporary fix typically have a general lack of knowledge, understanding, and experience with the process. Common misperceptions supporting this myth include:

Another common misconception is that polyurethane foam is weak and does not have the load-bearing capacity to support slabs with heavy traffic or large structures.

Common misperceptions supporting this myth include:

All lifting and stabilization polyurethane foams formulated and manufactured by Alchemy-Spetec are designed specifically for Geotechnical applications. Once cured, Alchemy-Spetec lifting foams are incredibly strong and durable. Easy expansion does not equal easy collapse. Factory-trained contractors can control the final lift level of a slab to within 1/8th of an inch.

Myth #3: Polyurethane Foam is too Expensive

When faced with the dilemma of a sunken slab, you have three options aside from polyurethane slab lifting: