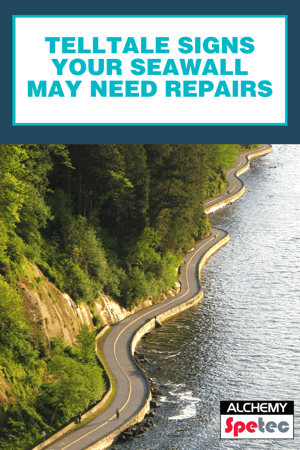 Seawalls embody the very image of long-lasting endurance and stability. Without proper maintenance and repair, however, the reality can be a bit different.  If your seawall is showing any of the signs listed below, you may want to look into repair options.

Here some telltale signs your seawall may need repairs...

I summed it up in this previous blog post An In-Depth Look at Polyurethane Seawall Repair...

Polyurethane installation equipment and procedures allow for a non-invasive, clean approach to repair that often allows the property owner to continue use during the process. In all cases, the property owner can resume activity on and around the structure within hours after a repair. As explained in our blog post Alchemy-Spetec's NSF Certification Spells Environmental Protection, most of our products have been rigorously tested not only for contact with typical recreational and commercial bodies of water, but even for contact with drinking water. So there is NO doubt about the environmentally friendly advantages of Alchemy-Spetec seawall repair materials.  Read more...