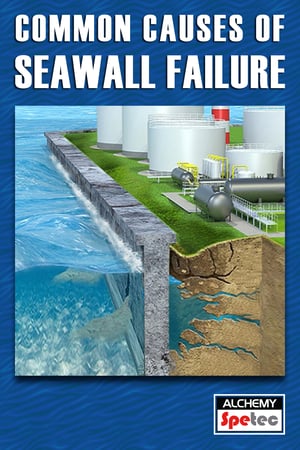 Seawalls are built to create a strong and stable barrier between a body of water and adjacent land, but why do they fail over time? Here are three common factors that can damage a seawall.

Incoming tide water pushes against a seawall and through cracks, joints, and defects. Over time soil erosion can occur on the inside of the wall. When the tide falls, water flows out and this erodes the soil, thereby weakening the structure. Soil erosion will begin to form small sinkholes in the corners of the inside section of a seawall. During periods of heavy rainfall, this problem worsens, and the deterioration process speeds up. Sinkholes are one of the earliest signs of trouble for a seawall.

Constructing vents and weep holes in the seawall to allow the water behind it to drain and pass through is good practice in order to prevent pressure build-up. Unfortunately, when debris forms and blocks these holes, the channel for water passage seizes to exist. This can then cause the pressure build-up to occur. After some time, the pressure can crack the seawall and the water may find other flow passages causing unwanted soil erosion.

If you live in an area that is susceptible to hurricanes, a seawall will very likely take some damage during hurricane season. The powerful winds erode soil from the back of the seawall to create sinkholes and voids. A lot of this damage can be prevented by reinforcing a seawall for the hurricane season.

You can greatly extend the life of a seawall by reinforcing or repairing it with semi-rigid hydrophobic polyurethane foams that react with moisture in the soil and expand to fill voids while they permeate sandy soil to form a solid, strong, watertight mass.