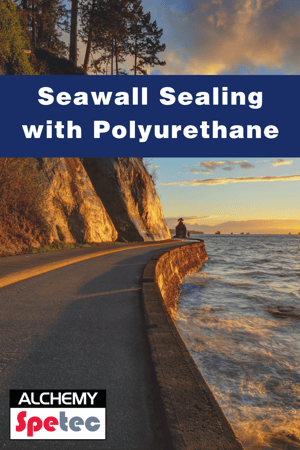 Does Your Seawall Need Sealing?

In general, seawalls protect property from erosion over time and from damage during extreme weather. But this is only the case when the seawall is not leaking. If your seawall is compromised, consider having it sealed with polyurethane resin. (To determine if your seawall is compromised, see our blog post Telltale Signs Your Seawall May Need Repairs.) The key to keeping problems at bay is to actively anticipate them. Regularly inspect your seawall or call us at 404-618-0438 to help you find a professional to inspect it for you.

AP Fill 700 and Spetec PUR H200 are both semi-rigid hydrophobic polyurethane foams that react with moisture in the soil and expand to fill voids while permeating sandy soil to form a solid, strong, watertight mass.  These are the two most commonly used foams for sealing seawall cracks, voids and defects (as well as for filling voids and stabilizing soil).

Andy Powell summed it up perfectly in Signs a Seawall is in Need of Repair...

If you live along the water, it is always going to be man against nature. That seawall is keeping your property from damage and from disappearing altogether. The key to extending the life of your seawall is the advanced polyurethane technology from Alchemy-Spetec. For more on the repair process itself, read An In-Depth Look at Polyurethane Seawall Repair. It's fast, clean, easy to install, and most of all, effective.